Reprint of the 1962 edition. Full facsimile of the original edition, not reproduced with Optical Recognition Software. "Considered the bible of scouting techniques" according to the Los Angeles Times, Football Scouting Methods explains the basic scouting strategies and insights of author Steve Belichick. He was widely viewed as the ablest football scout of his time and coached at the U.S. Naval Academy for 33 years; his son is New England Patriots coach Bill Belichick, a three-time Super Bowl winner. When Steve Belichick died in November 2005, the New York Times headline cited him as "Coach Who Wrote the Book on Scouting," and quoted Houston Texans General Manager Charley Casserly calling Football Scouting Methods "the best book on scouting he had ever read." Joe Bellino, Navy's Heisman Trophy winner in 1960, told the Times that Steve Belichick "was a genius. On Monday nights, he would give us his scouting reports, and even though we were playing powerhouses, I always felt we were prepared because he found a way for us to win." In recent years Football Scouting Methods has been one of the top ten most sought out-of-print books; used copies have been quite scarce. This reissue edition makes the original 1962 text available once again in exact facsimile. The book covers how to scout opponents, recognize defenses, analyze offenses, discover "tip-offs" that reveal the opponent's plays, compose a useful report, self-scout, and conduct postgame analysis. "Steve Belichick taught many younger men how to scout and how to watch film and how to prepare their teams for the next week's game," David Halberstam noted in the Washington Post, and his best student was his own son Bill Belichick, "one of whose greatest skills as a coach to this day remains his ability to analyze other teams, figuring out both their strengths and their vulnerabilities, and shrewdly deciding how to take away from them that which they most want to do." When CBS asked Bill Belichick to name his favorite book, he replied "Well, I've got to go with my dad's. Football Scouting Methods. I'd have to go with that." 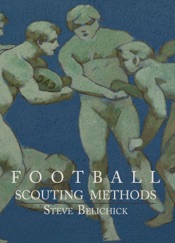