For many parents of troubled teenagers, a therapeutic program that takes the child from the home for a period of time offers some respite from the daily tumult of acting out, lies, and tension that has left the family under siege. However, just as the teenager is embarking on a journey of self-discovery, skill-development, and emotional maturation, so parents too need to use this time to recognize that their own patterns may have contributed to their familyï¿½s downward spiral. This is The Parallel Process. Using case studies garnered from her many years as an adolescent and family therapist, Krissy Pozatek shows parents of pre-teens, adolescents, and young adults how they can help their children by attuning to emotions, setting limits, not rushing to their rescue, and allowing them to take responsibility for their actions, while recognizing their own patterns of emotional withdrawal, workaholism, and of surrendering their lives and personalities to parenting. As such, The Parallel Process is an essential primer for all parents, whether of troubled teens or not, who are seeking to help the family stay and grow together as they negotiate the potentially difficult teenage years. 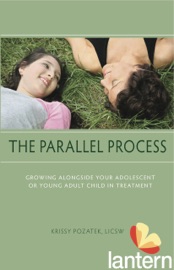