From a State Department insider, the first account of our blundering efforts to rebuild Iraq—a shocking and rollicking true-life tale of Americans abroad

Charged with rebuilding Iraq, would you spend taxpayer money on a sports mural in Baghdad's most dangerous neighborhood to promote reconciliation through art? How about an isolated milk factory that cannot get its milk to market? Or a pastry class training women to open cafés on bombed-out streets without water or electricity?

According to Peter Van Buren, we bought all these projects and more in the most expensive hearts-and-minds campaign since the Marshall Plan. We Meant Well is his eyewitness account of the civilian side of the surge—that surreal and bollixed attempt to defeat terrorism and win over Iraqis by reconstructing the world we had just destroyed. Leading a State Department Provincial Reconstruction Team on its quixotic mission, Van Buren details, with laser-like irony, his yearlong encounter with pointless projects, bureaucratic fumbling, overwhelmed soldiers, and oblivious administrators secluded in the world's largest embassy, who fail to realize that you can't rebuild a country without first picking up the trash.

Darkly funny while deadly serious, We Meant Well is a tragicomic voyage of ineptitude and corruption that leaves its writer—and readers—appalled and disillusioned but wiser. 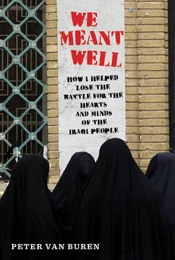 Free read eBooks online from We Meant Well. Review We Meant Well for free and without need to Registration. Read We Meant Well PDF/e-Pub/kindle fire on your devices without any apps or contracts.