Mixing business with pleasure is bound to get messy… for the first time, all three books in Ramona Gray’s sizzling hot “Undeniable Series” are available for one low price. If you love sexy office romance books, you won’t want to miss out on the Undeniable Series.

Undeniably His (Book One)

As CEO of Dawson Clothing, Luke Dawson doesn’t have time to babysit his new assistant. Her terrible fashion sense, shy demeanor and weird obsession with peanut butter sandwiches should leave him cold. So, why can’t he stop thinking about her? Why does her fragility and sweetness call so strongly to him? And why the hell does he keep having vivid and hot-as-hell sex dreams about her? It’s normal for a boss to want his assistant on her knees in front of him. Right?

Jane Smith is desperate. Caring for her ailing foster mother has left her broke and starving. Her new job as Luke Dawson’s assistant brings both a pay raise and hope for her dismal situation. Sure, her new boss has a reputation of being demanding and not prone to giving second chances, but a girl can deal with a difficult boss if her only other option is starving to death. It’s just unfortunate that her new boss is also gorgeous and sexier than any man has the right to be. It’s normal for an assistant to want to be on her knees in front of her boss. Right?

Mixing business with pleasure is bound to get messy…

Amy Dawson is a successful business woman, a talented designer and in love with the man of her dreams. Too bad the man of her dreams is her brother’s best friend and strictly off limits. Even if her family would accept the thought of them dating, Mark would always see her as the bratty little kid he grew up with. Besides, if sweet and gentle Mark knew what she really craved in bed, he’d never speak to her again.

Mark Stanford wants something he can never have – his best friend’s little sister. Amy may be his perfect woman but after practically growing up in her house, he'd never cross that line. Besides, if Amy knew exactly what he wanted to do to her in bed, she’d run screaming.

Mark and Amy can’t resist the pleasure they find in each other’s arms. But afraid of losing the only family he has, will Mark deny his true feelings for Amy? Or will he give in to the fact that he is, and always will be, undeniably hers?

Except tossing a complete stranger into the mix, banging him like a screen door, and having the best sex of her life could make her life’s recipe fall flat. And that whole sneaking out before the hot stranger wakes up? Not her finest moment.

But new coworker, Jackson Black is just what she’s looking for. Handsome. Reliable. Wicked sense of humour. Sleeping with a coworker has never been so tempting.

Only, Jackson is more than a splash of vanilla. He shares everything with his best friend, Ian—including women.

Will Jackson’s desires tear apart Chloe’s vision of the perfect life? Or can they make something even better since the sexy-as-sin, Ian Aldrin, is the stranger she spent one deliciously dirty night with?

Please note: These books contain detailed and smoking hot sex scenes that may not be your cup of tea. 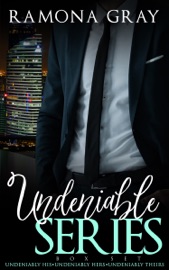