The dramatic journeys of the 19th century Gold Rush come to life in this geologist’s tour of the American West and the events that shaped the land.

In 1848, news of the discovery of gold in California triggered an enormous wave of emigration toward the Pacific. The dramatic terrain these settlers crossed is so familiar to us now that it is hard to imagine how frightening—even godforsaken—its sheer rock faces and barren deserts once seemed to them. Hard Road West brings their perspective vividly to life, weaving together the epic overland journey of the covered wagon trains and the compelling story of the landscape they encountered.

Taking readers along the 2,000-mile California Trail, Keith Meldahl uses settler’s diaries and letters—as well as his own experiences on the trail—to reveal how the geology and geography of the West shaped our nation’s westward expansion. He guides us through a landscape of sawtooth mountains, following the meager streams that served as lifelines through an arid land, all the way to California itself, where colliding tectonic plates created breathtaking scenery and planted the gold that lured travelers west in the first place.

“Alternates seamlessly between vivid accounts of the 19th-century journey and lucid explanations of the geological events that shaped the landscape traveled.”—Library Journal 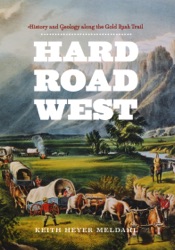