"London to Ladysmith via Pretoria" is a personal record of Winston Churchill's impressions during the first five months of the Second Boer War. It includes an account of the Relief of Ladysmith, and also the story of Churchill's capture and dramatic escape from the Boers.
"Ian Hamilton's March" is a description of Churchill's experiences accompanying the British army during the Second Boer War, continuing after the events described in London to Ladysmith via Pretoria. Churchill had officially resigned from the British army in order to pursue a political career, but on hearing of the outbreak of war in South Africa between the British colonies and the free Boer states, immediately made arrangements to take part. 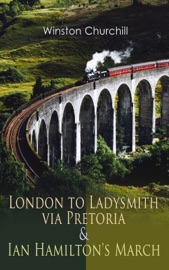